This shot I took this morning, I’ve been waiting a long time to get. 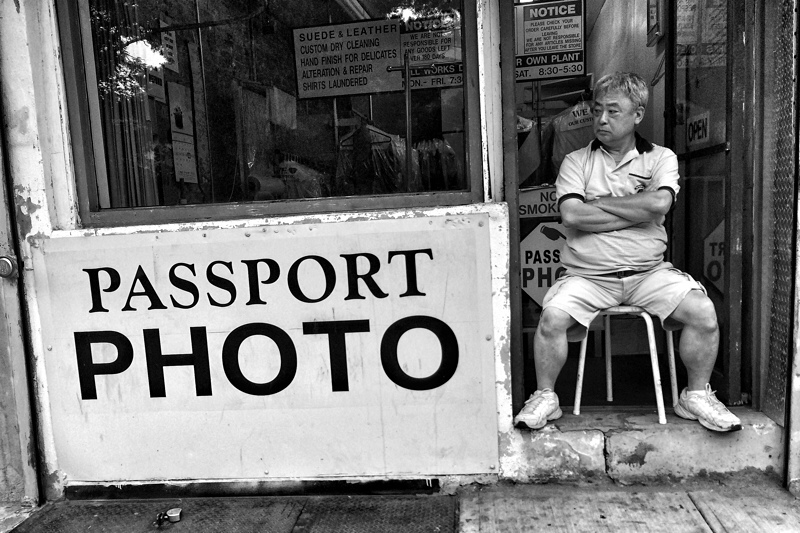 Every time I walk by this place in the morning on the way to my job, I see this store and the guy inside.

I’ve seen him inside the store, sitting above the Passport Photo sign and thought to myself that that’s the shot I want to get. Part of the problem though was the reflection of the window. I knew it’d obscure the gentleman’s face. I really wanted to get his face.

So this morning when I was walking by I saw that he was sitting in the doorway. I knew this would be the shot to get. In fact, I walked by him twice, shooting with my iPhone all along, to make sure I got what I wanted.

On my way home from my shoot today, I passed by his store again and saw he’d put up a sign saying that he was going out of business after 20 years in that location. He ended the note with “God bless you all.”

I had a swirl of feelings when I saw that. Sadness most of all. I don’t know the guy or the circumstances of his having to close his store, but I realized that when I took my picture of him a few hours previously, he probably knew he was going to hang up that sign in his window. The way his face looks and the way he’s sitting in my picture now has a whole different meaning to me. It reminds me of that saying to be kind to those people you meet because everyone is fighting their own battle.

I’m not sure if this guy won or lost.