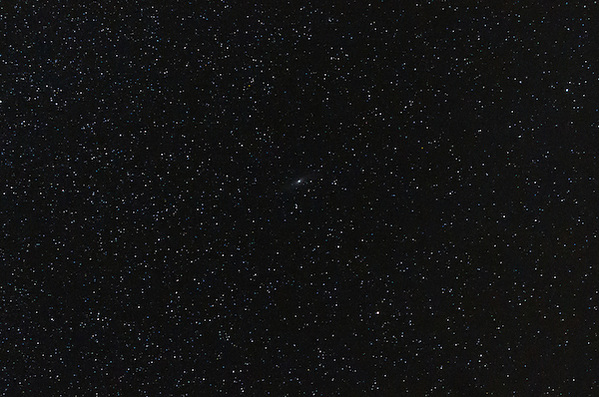 In October, I was on Cape Cod for my sister’s birthday party. It was one of the clearest nights I’ve seen in a long time. I decided to try my hand at some astrophotography with my Nikon D7000 and a 35mm f/1.8 lens.

I set the camera on the hood of my car, cushioned by my jacket (using it as a tripod) and did some exposures of the sky. It was hard not to shake the camera, but quite a few exposures came out. Like this one.

I was very surprised at what I saw. Right there in the middle of the frame was the Andromeda galaxy. I’ve never photographed anything like this ever. I was incredibly excited because most of the stars in this image I could not see with my eyes. It was only after I set up for a time exposure with the fast 35mm lens that I could see all that was there.

[ You can click here for a larger version of this pic]