My Dad’s Picture of President Kennedy 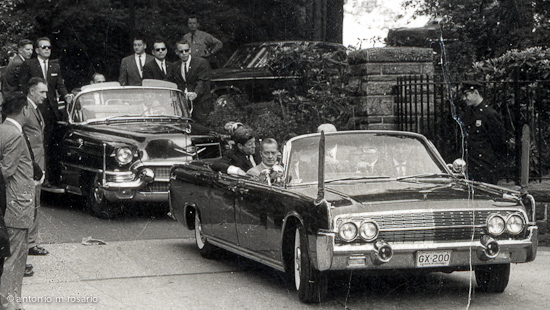 My dad’s shot of President Kennedy, found on the only contact sheet I have of my dad’s work. Scanned from a 35mm!

This shot was taken on May 19th, 1962 as President Kennedy left Gracie Mansion, the home of the NYC Mayor, who at the time was Robert Wagner. This was the day after Marilyn Monroe’s infamous birthday song to “Mr. President.”

I found this contact sheet amongst my late mom’s picture folders. My initial glance at it told me it was my dad’s photography and that it contained a few images of JFK. What I didn’t know is when and where it was taken. I first thought it was in Washington D.C. But I had scanned the contact sheet at the highest resolution of the scanner. When I brought it into Photoshop, I looked really close at some of the shots and I recognized a street sign that said “23rd Street.” So I knew it was in Manhattan. I checked with Google Street View and confirmed that the same buildings were in the shot (today it’s a Starbucks, of course).

Trying to tie down the date was a little harder. I did a search to see when Kennedy visited NYC. One event stuck out: he came to town for his birthday and to dedicate a war memorial in Battery Park. As I looked at the image above, it didn’t strike me as Battery Park (there is a hill in some of the shots and Battery Park is quite flat). The only hills I know about in NYC are uptown. When I started poking around on Google Maps, I saw Gracie Mansion (home of the Mayor). The aerial view looked promising. Of course JFK would visit the mayor. After I dropped back into street view, I knew I had the right place. JFK came off the FDR and went to Gracie Mansion. A little time later he left and my dad, standing on the corner of  East 89th Street and East End Ave.